The Concept of Pitch in Korean Music

The Korean understanding of pitch is different from the traditional Western understanding in which pitch is thought to be a single discrete sound, separate and distinct from adjacent pitches, and intonation of each pitch is consistent in both vertical and horizontal combinations. In contrast, the Korean understanding of pitch is more inclusive, encompassing decorative details and melodic gestures. The term um means sound in general and when it is applied to music it refers to a “pitch” that may consist of several pitches in the Western sense. This might be considered as a “pitch gesture” that moves from the original pitch through distortion and refraction. For example, the initial attack of a pitch may generate movement that undulates, as a slow vibrato, and may have a lift at its release. What would be considered one pitch gesture in the Korean understanding of pitch we might hear as one, two or three distinct and independent pitches in the Western sense. By analogy, in calligraphy, one stroke of the brush has an attack point, a sustained middle section, and a final tail, and the stroke itself varies from broad to narrow as the brush is lifted from the paper. Even if the stroke undulates and changes direction, it is still considered as one stroke. Thus, these calligraphy strokes are themselves rather complex, consisting of any number of smaller subtleties. These same observations apply to the understanding of pitch and the resulting pitch gestures.

These pitch gestures are associated with the important performance concept of sigimsae, pitch movement and manipulation. Sigimsae, commonly translated as “embellishment” or “decoration,” animates pitches and in doing so, gives them direction and shape. Sigimsae is not only the pitch itself, but also how the pitch is performed in the context of a melody. In Korean modal practice these pitch gestures are key to distinguishing the characteristics of one mode from those of another, even if the reference pitch content is the same. Sigimsae means “fermentation,” or the degree of maturity within an aging process. In that regard, it refers to the trademarks of technical skill that a musician demonstrates. The ornamentation, the embellishments and subtleties of performance practice that give life to the sound developed throughout a musician’s career. As a singer or instrumentalist matures, his or her interpretation of the music will reveal enhanced technical skill and ability, or greater sigimsae, which enhances the fluidity and flexibility of the melody and the dramatic character of the music.

Some examples of typical sigimsae patterns are presented in Example 1 a-j: (a) is a downward vibrato from a higher to a lower adjacent pitch; (b) is an upward vibrato from a lower to a higher non-adjacent pitch; (c) is a slow pitch slide down a third; (d) is a fast, accented pitch slide, called kkeokneunum or “bending note;” (e) is “raising the tail,” a pitch lift with a short release; (f) is an accented lower neighbor note, called “pulling the sound;” (g) is an intense vibrato which encompasses a fourth and a whole step above the reference pitch; (h) is a stepwise progression performed with lower and upper decorative pitches; (i) is a single pitch with a vibrato of an upper third; and (j) is a single pitch that has an extended turn figure, called “winding voice.” As indicated, some of these sigimsae have specific names, but others do not. Also, any of these pitch gestures may appear in variant forms, and may appear in combination with others. The western notation of these sigimsae does not do justice to their actual performance because they are fluid and rely on performance for clarity and context. 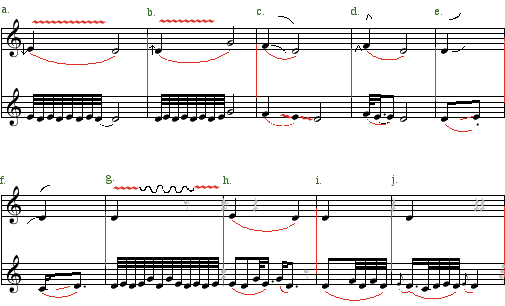 In Korean folk song, minyo is roughly divided, by both performers and scholars, into four main musical dialects, tori, reflecting regional and geographic boundaries. The term tori, which is also used in categorizing shaman ritual music, is widely used in modern scholarship to describe the characteristics of musical styles and idioms, including performance subtleties of the constituent pitches within the context of a mode. These are represented by various musical elements, such as pitch collection and the hierarchy and function of pitches within the collection, melodic patterns, sigimsae, and aesthetic expression, each unique to each geographical region in Korea. There are four categories of regional stylistic distinctions: gyeongtori (Central); susimgatori (Northwestern); yukjabaegitori (Southwestern); and menaritori (Eastern). Among the many musical elements of each region, including pitch content and unique performance practices, the melodic component is the most distinctive.