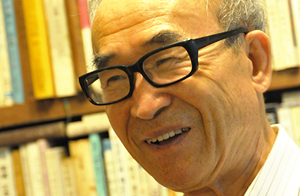 Poetry Off the Shelf: Ko Un

co-hosted by the Poetry Foundation

more info from the Poetry Foundation

Renowned Korean poet and activist Ko Un will give a lecture and poetry reading in a rare Chicago appearance. Co-sponsored by the Poetry Foundation, the Literature Translation Institute of Korea, the Consulate General of the Republic of Korea, and the Chicago Public Library.

For his keen sensitivity, outstanding powers of intuition, the breadth and depth of his imagination and his skillful use of language, as well as the maturity of his understanding of human life, Ko Un is widely acknowledged to be Korea’s most prolific and revered poet, with an immense literary achievement of 155 books, out of which about 70 are poetry books. He recently published Untitled Poems, a poetry collection of 607 poems in 1013 pages.

Ko Un was born in 1933 in Gunsan, North Cheolla Province, South Korea. He made his official debut as a poet in 1958 when he was living as a Buddhist monk. For a decade in the 1960s he practised Seon meditation and traveled throughout the country.

After returning to the secular world in 1962, he dedicated himself thoroughly to nihilism full of desperation and alcohol, producing many striking works. He was awakened to the social reality of his country by the self-immolation of a poor laborer late in 1970 and became engaged in political and social issues, opposing the military regime and joining the struggle for human rights and the labour movement.

For more than a decade, he was, many times and for long periods, persecuted by the Korean CIA, with arrests, house arrests, detentions, tortures, and imprisonments. In 1980 he was sentenced to 20 years of imprisonment, but thanks to international efforts for his rescue he was set free with a general pardon in 1982, after serving two and a half years’ imprisonment in a solitary cell.

After getting married at the age of 50, a period of productivity unparalleled in the history of Korean literature began, which one critic has called an “explosion of poetry.”

The 7-volume epic Mount Paekdu, a huge 30-volume poetry project Ten Thousand Lives (Maninbo) with over 4,000 poems, a 5-volume autobiography, and numerous books of poems, essays, and novels came pouring out. “He writes poetry as he breathes,’ a literary critic once said, “Perhaps he breathes his poems before putting them to paper. I can imagine that his poems spring forth from his enchanted breath rather than from his pen.” Literary critics often call him the Ko Uns instead of Ko Un, because of his incredible activity, he is a true volcano of productivity. Ko Un has also manifested an immense diversity of poetry forms, from epigrams of a couple of lines to long discursive poems, epic, pastoral, and even a genre of poems he has himself created, of which Maninbo (Ten Thousand Lives) is the main example, termed “popular-historical poetry”.

He was invited to spend time as a visiting research scholar at the Yenching Institute of Harvard University and at UC Berkeley, and also, more recently, at Ca’ Foscari University of Venice, Italy with the title of Honorary Fellow.

He has received some 20 prestigious literary awards and honours at home and abroad, including the Björnson Order for Literature (Norway), the Griffin Lifetime Achievement Prize (Canada), the Golden Wreath Award of Struga Poetry Evenings (Macedonia).

About 50 volumes of his work have been translated into more than 25 foreign languages, Oriental and Western. He is currently President of the Compilation Committee of the Grand Inter-Korean Dictionary.

He aims to make his entire life, and even his grave, a poem, refusing to be imprisoned by efforts to write poetry as an end itself. That is why most Korean literary critics agree that his poems have attained a great liberation from language.

The Cindy Pritzker Auditorium is located on the lower level of the Harold Washington Library Center.

Parking info may be found at the Chicago Public Library website.